A report released in mid-August by the Treasury revealed that the budget deficit has declined by 38% for the first 10 months of the government’s fiscal year when compared to a year earlier. The narrowing of the deficit is attributable to increases in revenue receipts and across-the-board spending cuts. In the first 10 months of FY 2013, individual income tax, corporate tax, and payroll taxes all grew over last year. These numbers are reflective of the improving employment situation in the U.S. and policies resultant of the American Taxpayer Relief Act of 2012. The recent profitability and dividend payments of Fannie and Freddie have also helped shrink the deficit. In the second quarter, Fannie Mae and Freddie Mac paid $10.2 billion and $4.4 billion to the Treasury, respectfully.

According to the Wall Street Journal, “The U.S. government is posting the strongest revenue since before the recession, buoyed by higher tax rates and a slowly improving economy, leaving the federal budget on track for its narrowest deficit in five years.” 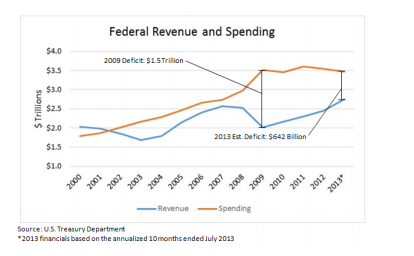 For the fiscal year ending September 30, the Congressional Budget Office estimates a deficit of $642 billion, compared with $1.087 trillion a year earlier, resulting in the smallest gap since 2008′s $459 billion shortfall. Under current law, revenues are projected to rise more rapidly than spending in the next two years, resulting in an even greater narrowing of the federal budget deficit.

With increased revenues and spending cuts, the deficit will continue to decrease. These recent indicators are hopefully a trend that will continue into the future and potentially have a positive impact on the healthcare industry. With a decreasing deficit, there will be less urgency to cut reimbursement to healthcare service providers. Therefore, the decreased risk of further cuts to providers should be considered when valuing a healthcare services enterprise.