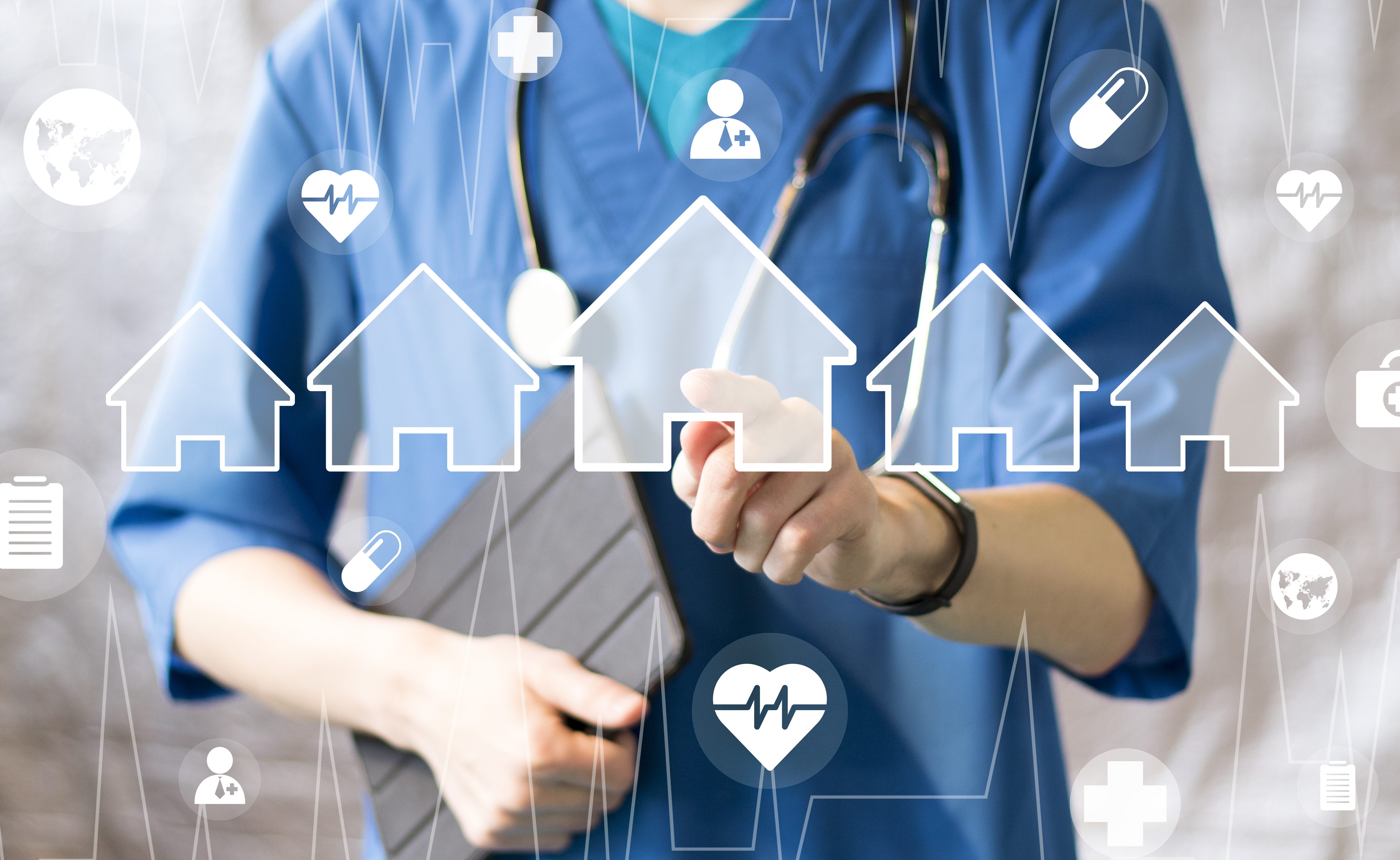 CMS finalized the Calendar Year 2020 payment and policy changes for the home health industry on Thursday October 31, 2019. The home health industry had been waiting for the final estimated impact of the Patient-Driven Groupings Model (PDGM) and, to the relief of the industry, the reimbursement declines were not as severe. The market responded positively to the announcement, with EBITDA multiples for publicly traded home health operators increasing 10-15% after the ruling was released. 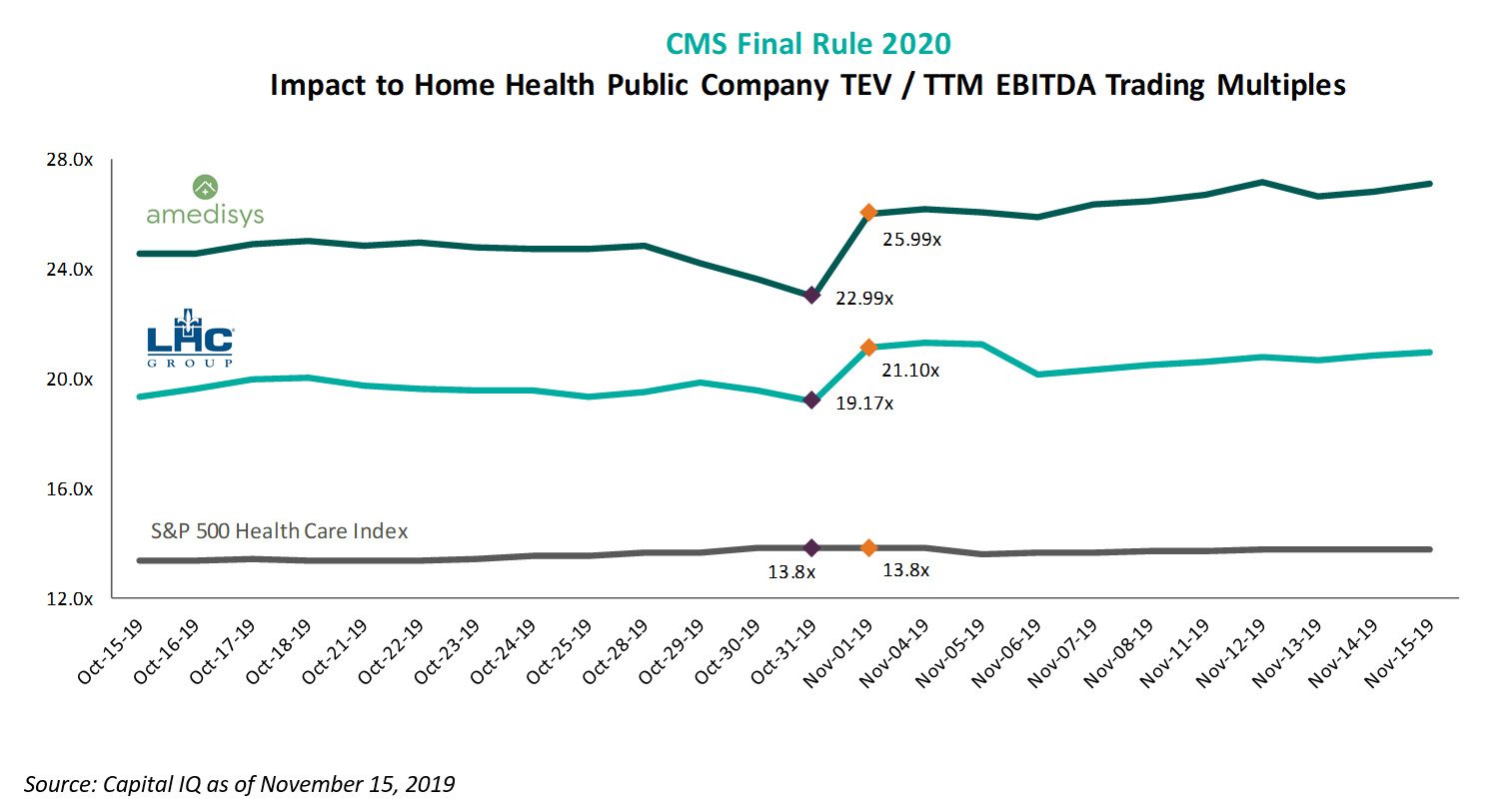 While the large public operators appear to have confidence in their ability to weather payment reform, the outlook and financial viability for smaller business owners is less certain.  The likely outcome of this environment is greater consolidation, which has already been evident amongst and between forward-thinking larger to midsized operators.  Smaller operators have three choices: (1) invest in infrastructure and continue to seek efficiency opportunities, (2) sell to a consolidator or (3) close. Keith Myers, Co-Founder, Chairman & CEO, discussed the impact of PDGM in a recent earnings call stating:

“Combined with the two 30-day payment periods under PDGM, the elimination of the RAP should lead to more consolidation in the industry than we’ve experienced in the last 2 decades. It will hit cash flows hard for the smaller agencies; but for the larger agencies, such as LHC, we would expect minimal impact.” Keith Myers, Co-Founder, Chairman & CEO, LHC Group Q3 2019 Earnings Call

In any event, a net reduction to the total number of home health agencies is almost guaranteed.  The good news is that the home health industry is here to stay and will continue to play a prominent role in the redesign of the healthcare system. However, while more clarity exists regarding 2020 payment policies, operators that wish to remain financially viable must continue to make necessary preparations for likely continued reimbursement pressure.

Effective January 1, 2020, the Bipartisan Budget Act of 2018 requires CMS to implement a major change to the home health prospective payment system referred to as the Patient-Driven Groupings Model (“PDGM”). This is set to be the most impactful revision to home health reimbursement in decades and will bring many changes that will need to be understood by home health providers. Notably, the PDGM will include: 1) a 30-day payment period and 2) a case mix methodology that excludes therapy visits, among others.

PDGM was mandated to be budget neutral with some agencies benefiting from the change, and other agencies experiencing reimbursement decreases. Based on the CMS 2020 Final Rule, without certain behavioral adjustments the overall estimated impact of PDGM will be a 4.4% reimbursement rate reduction. Market participants responded positively to this ruling, as it represented a less severe impact from both the CMS 2019 Final Rule estimates of 6.4% and from the CY 2020 Proposed Rule estimates of an 8.0% impact.

The average all-payor margin of 4.5% (per MedPac) does not offer significant insulation against the PDGM reimbursement changes for many agencies. In addition to the all-payor margin, other industry dynamics will likely cause further consolidation and transaction activity in the market.

The home health industry has been at the forefront of healthcare conversations in recent years, as rising healthcare costs and alternative payment models are contemplated. A frequently cited solution to reducing rising healthcare costs is to place patients in the lowest cost setting of care.  The home health space offers a financially attractive alternative to traditional institutional settings for post-acute care, and as such utilization of home health services has increased substantially in recent years.  A few relevant datapoints to consider include the following: 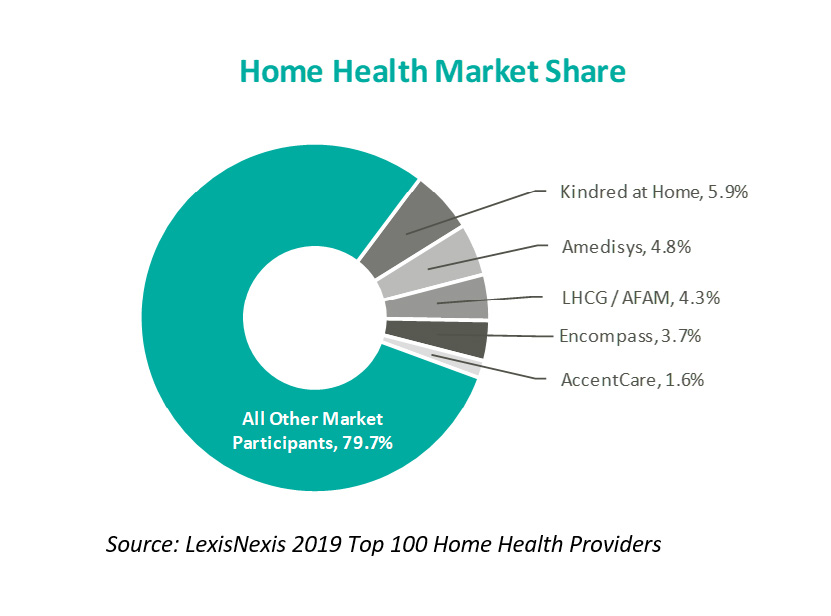 The Home Health market has remained strong throughout 2019. Health systems continue to find ways to expand their continuum of care, and home health operators are positioned to financially benefit from the increased demand of post-acute care services. The appetite for home health services is driven by several factors, including: 1) Increasing population over 65 years of age and 2) low cost setting of home health relative to other post-acute care settings. 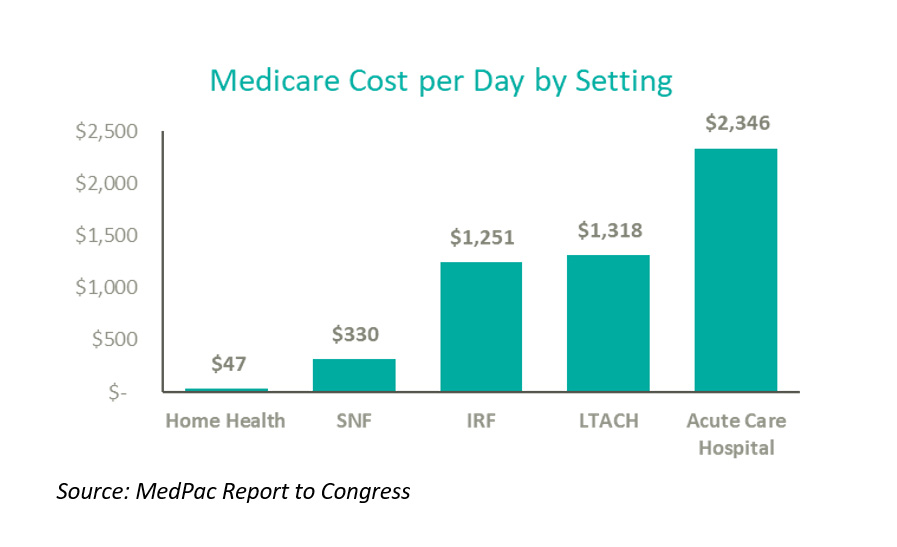 The deal environment amongst and between forward-thinking larger to midsized operators has been robust.  In November 2014, HealthSouth Corporation (NYSE: HLS) agreed to acquire Encompass Home Health and Hospice (“Encompass”), for approximately $750 million. At the time, Encompass was the 5th largest provider of Medicare-focused home health services in the U.S. with over 140 locations across 13 states and trailing twelve-month revenue of approximately $355 million as of October 2014. At the time of the transaction, HealthSouth president and CEO, Jay Grinney, highlighted the opportunity presented by the highly fragmented home health industry by stating:

“One of our stated strategic objectives has been to expand into home health, assuming we were able to acquire a high-quality, scalable asset that was capable of consolidating the highly fragmented home health industry.” Jay Grinney, President and CEO, HealthSouth

Since 2014, the interest in home health services started to accelerate. In 2017, two large national deals highlighted this trend, the first being the merger of two of the largest home health providers, LHC Group (Nasdaq: LHCG) and Almost Family (Nasdaq: AFAM). The merger, which closed April 1, 2017, had an implied transaction value of approximately $2.4 billion at an implied synergy-adjusted pro forma EBITDA multiple of approximately 14.0x2,3.  The combined entities provide home healthcare services across 36 states with over 780 locations. At the time of the merger, LHC estimated cost synergies of approximately $25 million. LHC Group’s CFO Joshua Profitt recently confirmed the company has realized larger synergy levels during the Q2 2019 earnings conference call:

“We realized a total of approximately $7.8 million in pretax cost synergies in the second quarter, which now brings the realized cost synergies to an annual run rate of $31.2 million from the Almost Family acquisition.” Joshua Profitt, CFO, LHC Group Q2 2019 Earnings Call

In the second  large national deal announced during 2017, Humana (NYSE: HUM) and private equity firms TPG Capital and Welsh, Carson, Anderson & Stowe (“WCAS”) entered into an agreement to acquire Kindred Healthcare (NYSE: KND) for approximately $4.4 billion.  As part of the transaction, Kindred’s home health, hospice, and community care segment, Kindred at Home, was spun off as a separate entity where Humana acquired a 40.0% stake in the segment, with an option to acquire 100.0% of the business in the future.  TPG and WCAS acquired the remaining 60.0% of the segment, as well as full control of Kindred’s remaining operations (long term acute care, inpatient rehabilitation facilities, and specialty hospital segment).

The success of these larger national deals from a diverse set of acquirers including payors, for-profit operators, and private equity players enhances market participant interest in the space. As additional clarity forms around PDGM and reimbursement changes, it is likely that large strategic buyers and private equity firms will look to capitalize on opportunities to further consolidate as smaller agencies face reimbursement pressure.

While the larger national deals have garnered much of the attention, the transaction environment for smaller local operators continues to drive much of the deal volume. Often the smaller transaction activity includes a local health system participant. These systems are interested in the ability to drive population health initiatives and further their strategic missions, but may not have as robust experience operating home health service lines as larger national players and may make the decision to partner (i.e. joint venture) the service line with a specialized operator in order to enhance overall profitability.

Specialized operators are likely to be more aggressive in pursuing growth strategies to align with local health systems or execute upon market consolidation strategies.  In their Q2 2019 earnings call, CEO Keith Myers from LHC Group discussed their acquisition strategy for FYE 2019:

“Our target M&A volume for 2019 has been between $100 million and $150 million [revenue]. To date, we have announced 6 transactions which totaled approximately $81 million in annualized revenue. These transactions include more hospital joint ventures, several tuck-in acquisitions … and a strategic acquisition of Visiting Nurse Association of Maryland with approximately $35 million in annual revenue”

“Should there be a disruption among smaller providers due to PDGM in 2020, we will be well positioned to gain market share, both organically and inorganically”

“We believe PDGM has the potential to accelerate an industry consolidation unlike any we’ve seen in recent memory. We will be ready” Keith Myers, Co-Founder, Chairman & CEO, LHC Group Q3 2019 Earnings Call

Overall, the outlook for home health transactions throughout the remainder of FYE 2019 and 2020 continues to be strong.  The observed industry fragmentation and growing importance of home health as a preferred patient destination will continue to create robust joint ventures, strategic partnerships, and acquisition opportunities.

Trading multiples for the large home health operators have expanded significantly in the last ten years. For LHC Group, average total enterprise value (“TEV”) to EBITDA multiples increased from an average of 7.0x throughout 2009, to an average of 22.3x in 2019. Amedisys’ trading multiples showed similar growth, increasing from 6.6x throughout 2009 to 23.6x during 2019. The S&P 500 Healthcare index expanded from 7.8x to 13.5x during the same time period.

The forward EBITDA multiples show a similar story, with the home health operator multiples expanding significantly more than the healthcare industry benchmark between 2009 and 2019.

The public markets are currently pricing home health operators, in terms of forward EBITDA, at the highest levels in recent history. The markets see tremendous growth opportunity, either through consolidation or other industry dynamics, in order to price operators at levels significantly higher than industry benchmarks.

For smaller operators, valuation ranges have varied widely. Operators that are well-positioned to absorb the various policy headwinds and stay competitively relevant in the market are commanding higher valuations (while not as high as public operators). On the other hand, the transaction environment has not played out yet for those agencies that may struggle as a result of PDGM.

Several home health agencies may be forced to exit the market or look to consolidate as the average all-payor margin of 4.5% does not offer significant insulation against the PDGM reimbursement changes (4.36% reimbursement impact without behavioral adjustments).  The current pricing environment for the large public operators would suggest these companies, and other sophisticated operators, will thrive on successful consolidation efforts and continued industry growth.

The expected growth of the industry, the success of the recent large national deals, as well as the reimbursement headwinds would imply the transaction environment for home health agencies will continue to remain active.