VMG Health > Insights > Blog > Blog > Physician-Owned Hospitals: A Tumultuous Past Has Given Rise to a Resilient Industry

Physician-Owned Hospitals: A Tumultuous Past Has Given Rise to a Resilient Industry

VMG has been intricately involved with physician owned hospitals (POHs) since their inception. In fact, VMG assisted in the development and continues to be involved in an advisory role of numerous highly successful POHs, both locally and nationwide. Our involvement with this industry has afforded us the opportunity to observe the financial and operational performance of POHs during some of the most tumultuous years this young industry has experienced.

From the very onset of this young industry, POHs found themselves in the crosshairs of both a powerful lobby (the American Hospital Association) as well as policy-makers (notably Congressman Pete Stark and Senator Max Baucus) which advocated capping existing physician investment and prohibiting future development of POHs. Both of these opposition groups argued that POHs cherry-picked only the most profitable cases from community tertiary hospitals and created a problematic financial incentive of over-utilization. As a result of this opposition, two separate moratoriums on new POH development were enacted – first, back in late 2003 (which lasted approximately 3 years) and more recently, at the conclusion of fiscal year 2010.

The most recent moratorium, promulgated by the Patient Protection and Affordable Care Act (PPACA), prevents any new POHs developed after 2010 from receiving Medicare licensure and restricts the growth of existing POHs. These growth restrictions prevent POHs from increasing the number of patient beds, operating rooms or procedure rooms past that which existed in early 2010 and limits aggregate physician ownership to that which existed in early 2010. At the time, it was thought that this legislation would deliver a crippling blow to the industry and result in its eventual demise. In a 2010 article that Elliott Jeter and I wrote for Physician Hospitals of America, we painted a much brighter outlook for the industry as it was our observation that many of these POHs did not have the need or desire to expand capacity or aggregate physician ownership. These facilities, most of which are smaller and more focused than larger acute care hospitals, were in a unique position to weather the storm. We concluded that the impact of this legislation was unique for each POH depending on their specific characteristics. We grouped POHs into three broad categories:

POH’s predominately fall into the first category; as such they have not been adversely impacted by this restrictive legislation. In fact, an argument could be made (and has been by certain POH owners) that this legislation actually increases the value of existing POH by significantly increasing the barriers to entry and limiting supply. VMG is fortunate to do work for many of these POHs on an annual basis. As a result, we have the opportunity to benchmark performance of these facilities over time and draw meaningful conclusions on the state of the industry as a whole. 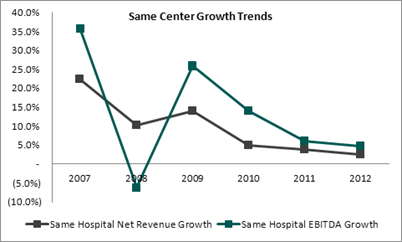 As illustrated in the chart above, same center growth in net revenue and EBITDA has followed a predictable pattern given the relative youth of this industry. High growth in net revenue and EBITDA was experienced in the early to mid-2000s (not shown) as these facilities attracted significant interest from eligible physician investors. The recession in 2008 exacerbated the financial impact to an industry that was already experiencing the obstacles of a maturing industry (increased competition, reimbursement challenges, dearth of eligible physician investors, etc.). Of particular note, however, is the severity of the swings in EBITDA growth as compared to Net Revenue. This makes intuitive sense as unexpected shocks to Net Revenue are met with a delayed reaction by POH management, whose response of cost reduction takes a considerable amount of time to execute. The subsequent bounce back in EBITDA growth from 2008 to 2009 illustrates that such cost cutting initiatives ultimately bore fruit. 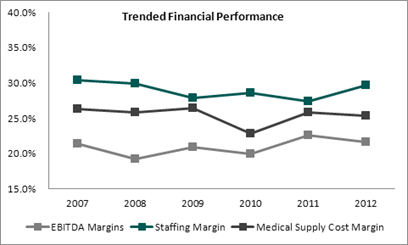 As evident in this chart, POH management has shown to be very adept at controlling costs in the face of declining growth in Net Revenue. Staff and Medical Supplies, two significant cost components of any POH, have not increased as a percentage of net revenue. EBITDA margin, which you would expect would fall at least moderately in the face of declining growth in same center Net Revenue, has remained remarkably stable.

The leaner POH hospital is not forced to absorb the high fixed costs required to deliver services across the entire spectrum of health care. Operational processes can also be streamlined, and the POH hospital has the ability to manage its resources oftentimes more efficiently than a general hospital.

While many believed the legislation provisions to limit POH growth would lead to their demise, our analysis supports our 2011 conclusion that POHs, being small, efficient and focused, appear to have weathered the storm quite well and are poised to remain a viable and important part of the future healthcare landscape.