Healthcare Reform and the ASC Industry: Observations & Outlook from the Experts

How has the Affordable Care Act (“ACA”) shaped the ASC market? According to leaders in the ASC industry, this is a question to which the response has been “it’s too early to tell.” With the first open enrollment period closing this past April and the second enrollment period opening last month, healthcare reform implementation is well underway and publicly traded/ large privately held ASC operators can provide meaningful insight into key trends for the overall ASC industry. We analyzed management commentary of AmSurg Corp. (“AmSurg”), Surgical Care Affiliates, Inc. (“SCA”) and United Surgical Partners International, Inc. (“USPI”), and identified the following trends: 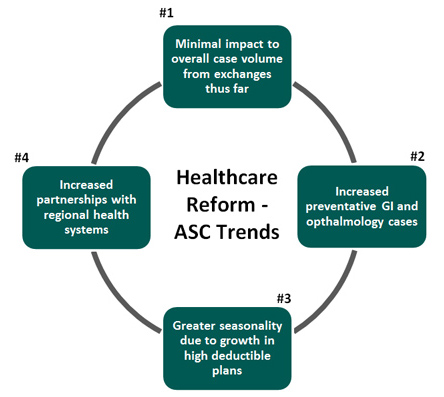 The key underlying trends summarized above can be demonstrated by the following quotes from ASC leadership.

“In the last few months, so as kind of a current run rate, about 1.4% of our [case] volume [over Q3]…is coming through exchange products, and perhaps about 50% of that might be…incremental patients, so previously uninsured patients. And those contracts are at commercial rates. In fact, in some geographies, the payor is just porting over our existing commercial contract into their exchange product, so they’re at commercial rates. So I’d say, at this point, it’s been an incremental positive to us….It’s not an earth-shattering dynamic like it would be if we were in the ER business or something like that, where you have this huge amount of uninsured. But it’s more of an incremental for us, and I’d say it’s been incrementally positive.” – Andrew P. Hayek, SCA CEO during Q3 2014 Earnings Call

“We did about 220,000 cases in the first quarter, and 600 of those were exchange cases. And those were all right at commercial rates. Many of those plans, we were out-of-network with the plans, but the patient presented and the plan asked us to go ahead and treat the patient because they’re trying to make sure that they have a successful network and their patients have access to care. So it’s not yet meaningful for us in terms of a volume standpoint.” – Jason B. Cagle, USPI CFO during Barclay’s High Yield Bond Conference May 14, 2014

“…on the ambulatory center side, GI and ophthalmology have been the strongest performers this year. And as you would expect, I think GI still has a little bit of tailwind from the Accountable Care Act which creates some incentives…particularly [for] colon cancer screening.” – Christopher A. Holden, AmSurg CEO during Q3 2014 Earnings Call

“…the healthcare reform by itself promotes more preventative medicines, particularly GI, and [puts] specific incentives in for colon cancer screening. So we want to continue to take advantage of them. That’s a 3- to 5-year process, because it affects not only Medicare, it also affects the commercial payers. They’re required to give the same benefit. But that’s a grandfathering process. It won’t be mandatory for you to have that until you change your plan, which everyone tends to do every 3 to 5 years. So there will be a cycle there. – Christopher A. Holden, AmSurg CEO during Deutsche Bank Healthcare Conference in May 2013

“The Affordable Care Act creates incentives, particularly for GI. There’s no out-of-pocket, no responsibility for colon cancer screening under the new Affordable Care Act. Also the obvious expansion of coverage to hopefully 30 million Americans. I’ve already mentioned the affordability advantage that we have. We believe that 50% of the market share is currently performed in the more expensive setting. And there’s a lot of pressure for others to either become more efficient or to shift the business in our direction. We could put up 10 slides on the demographic trends, everyone is aware of the aging of the U.S. What you may not know is about half the people who should be screened for colon cancer [are] not each year. This gives us a big opportunity. And also an opportunity to improve eye care…through cataract surgery and things like that, where people today tend to wait too long for a procedure that is really nearly a miracle in how effective it works.” – Christopher A. Holden, AmSurg CEO during Deutsche Bank Healthcare Conference on May 7, 2014

#3 – Greater seasonality due to growth in high deductible plans

“We believe the shift toward patient responsibility via higher co-pay and deductible plans has led to the more cyclical nature of our business. Although it’s too early to predict with any certainty, we are optimistic that the same facility volume growth we have enjoyed in recent months will continue through the end of the year, and combined with an even more favorable payer mix for a solid finish to the year. – William H. Wilcox, USPI CEO during Q3 2014 Earnings Call

“But we are in this period where each year, more and more employers are converting to only a high-deductible option for their employees. And we’ve seen that sticker shock in the first year.” – Jason B. Cagle, USPI CFO during Barclay’s High Yield Bond Conference on May 14, 2014

“Most of what has occurred in the physician employment is isolated to a few specialties, primary care, cardiology, some hospital based physician services, and attempts at orthopedics, so those are tricky. If you really boil down who is most at risk, it is the physician that is most dependent on the type of infrastructure that lies inside the hospital. If they can duplicate it without the hospital, there’s less risk and they’re not as targeted. So that’s really generated a lot less noise than you would have imagined, given the magnitude of the shift in the last few years. And it’s actually turned into more of an opportunity for us as the systems really didn’t want to spend their money on our particular specialties, but also want to look at partnership around our outpatient facilities.” – Christopher A. Holden, AmSurg CEO during Deutsche Bank Healthcare Conference on May 7, 2014

“There is a significant consolidation opportunity out there within our industry still. And we think as reform starts to pick up, and it’s come to our little niche of health care later than others. Many of these facilities aren’t going to have the infrastructure or the capability to be a part of whatever network winds up being the winner in their markets, and they are going to look to join an organization with a little more scale and a little more infrastructure.” – Jason B. Cagle, USPI CFO during Barclay’s High Yield Bond Conference on May 14, 2014

“From a strategic standpoint, regardless of the pace of reform in each of the markets that we operate in, each of them, whether it’s pure regulatory reform through the Affordable Care Act or just the payors and the employers in the market, have some initiative underway to get the highest quality care in the most cost-appropriate setting that they can. We’re a higher quality and lower cost provider. – Jason B. Cagle, USPI CFO during Barclay’s High Yield Bond Conference on May 14, 2014

VMG is fortunate to be extremely active in the ASC space. This exposure provides us with our own unique insight and observations regarding current trends. The common themes regarding the ACA include:

We expect exchange volumes will increase in ASCs as the ACA becomes more established and integrated within the ASC industry.